Need help getting rid of wood-boring beetles? Are you Looking for any best wood boring beetle control service? ACME Pest Control Chennai is your best choice. Their experts are available to help you with their wide range of services; you can rest assured that your property is protected.

What are wood-boring beetles?

Wood-boring beetles are often challenging to detect because they remain hidden in the infested wood. The first signs of their presence are the Exit Holes that the adult borers leave when they emerge from the wood. The holes are D shaped as the adult borer backs out of the wood, pushing frass (wooden debris and sawdust) out in front of it. Often, multiple Exit Holes will be found close together, as these insects tend to infest wood in groups.

Wood-boring beetle larvae eat wood and tunnel through it as they grow. They leave behind galleries, which are zigzag patterns of tunnels as they burrow. These galleries are lined by frass, pushed out from Exit Holes in the form of emerging adults. The larvae eventually become adults and mate, and the cycle begins again. 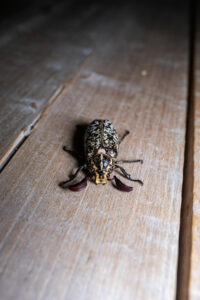 There are many different wood-boring beetles, each specializing in another type of wood or tree. Some common examples include:

Powderpost Beetles: These beetles infest hardwoods like oak or maple. Their name comes from the fine powdery frass they produce when eating wood. Powderpost larvae tunnel below the wood’s surface, causing severe damage over time. Adults are 1/16″ to 1/8″ long with narrow bodies and reddish brown or black coloring.

Deathwatch Beetles: Deathwatch beetles feast on hardwoods such as oak, ash, elm, and beech. They earned their name during medieval times when people would listen for their tapping noise while keeping all-night vigils over sickbeds or dead bodies (it was believed that hearing this beetle was an omen of death). Adult deathwatch beetles are small, 1/8″ to 3/16″ long, with oval dark reddish brown bodies. Their larvae tunnel through the wood just beneath the surface, leaving large galleries that weaken the structure of infested timber.

Long Horned Beetles: These pests get their name from their long antennae, which can be almost as long as their body (1″ to 1 ½ “). They infest various trees, including conifers and hardwoods like oak and maple. Collectors prize several species of long-horned beetle for their beautiful coloring and patterns (most of these species hail from Asia or South America). Adults lay eggs beneath tree bark; when larvae hatch, they tunnel into the tree to feed on its sapwood, eventually killing the tree if left unchecked.

About the Author: admin